In June 2013 Museu da Crise was invited to Portalegre to participate in the AJUDADA event. People from all over the world had travelled to this city in the Alentejo region in Portugal to bring their knowledge and skills on the subject of gift economy to good use in collaboration with the local community. The event kick-started with a conference where many examples on alternative economies were showcased and speakers such as Gary Alexander, Charles Eisenstein and Ana Margarida Esteves shared their insights with the audience. On Saturday there were several activities; Museu da Crise hosted an ongoing workshop building on the results achieved during Guimarães Cultural Capital of Europe 2012. During the workshop participants were asked to envision and give shape to the future departments of the Museu and to think of concrete actions to reach the ultimate goal: the ‘museumification’ of crisis. Five departments were created that would be realised later when Museu da Crise participated in the 2013 Lisbon Architecture Triennial: the Emerging Collection Department, the Parallel Action Department, the Unofficial Education Department, the Subversive Research Department and the Alternative Communication Department. 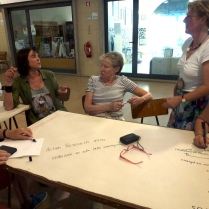 On the last day of AJUDADA Museu da Crise created a card game called ‘O Muda Mentes’ (Change Minds) to undermine the status quo. It is a variation of the well-known game of quartets and an attempt to cha(lle)nge the stories we are being told – and tell – about why society is organised the way it is. ‘The free market is the most efficient way to structure society.’ ‘If products are for free, people won’t understand the value.’ ‘How else? There is no alternative!’ And so on… The game, with drawings by Paes Leão, has seven quartets that illustrate alternative ways of organising our basic needs such as food, shelter and energy as a community. These are simply too important to be left to the whims of the free market. The original game was left behind in a new community centre in Portalegre, but a DIY version was made available for free through the Museu da Crise website.

Daniela Paes Leão (Coimbra, Portugal, 1974) graduated in 1999 from the Faculty of Fine Arts of the University of Porto. She works as a visual artist and filmmaker, developing creative projects that combine the aesthetic mediums of film, photography, publication and web design with sociology, anthropology and other disciplines. She lives and works at the present moment in Amsterdam, the Netherlands.
Loading Comments...
Comment
×