In Guimarães, the Museu da Crise was part of the programming of the Educational Service of Guimarães 2012 European Capital of Culture, under the Love Difference project by Michelangelo Pistoletto, whose programme aims to create a purposeful dialogue and to expand concepts and methodologies.

The central themes the Museu da Crise investigated in Guimarães were the ingenuity, flexibility and creativity – so characteristic of the Portuguese – related to the resistance to this crisis in which we live today. 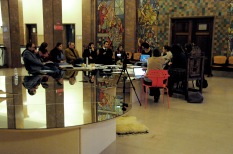 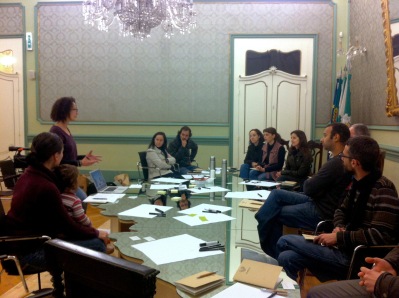 In Guimarães, the Museu da Crise manifested itself through three actions: Firstly at the 7 tables / 7 seas constituting the Love Difference project that are located in seven emblematic institutions in the city of Guimarães, a questionnaire was available that addressed the effects of the current financial crisis on, and the alternative economies already existing in the daily life of the Portuguese. In addition news clippings relating to the Portuguese government’s austerity programme were available. The questionnaire could also be completed online at the museum’s website. Secondly the data generated by this questionnaire was included in a series of workshops that were being held in each institution hosting the Love Difference project; with the exception of Escola Superior Artística do Porto (ESAP). The aim of the workshops was to collect and systemise the examples of alternative economies already existing in the daily life of the Portuguese and to formulate new ones. Six distinct groups of people (emigrants, immigrants, school children, university students, lawyers and teachers) participated in the workshops and collaborated in the creation of a poster to present the collected information from the questionnaire and the workshops to the population of Guimarães. These posters were subsequently spread throughout the city and its surroundings. And lastly the entire process was filmed and incorporated in a movie that premiered at the roundtable session organised at ESAP on December 6th that concluded this instalment of the Museu da Crise. The film is about the current crisis, the way people in general are affected by it and the motivations and objectives of Museu da Crise and also includes an interview with the architect Siza Vieira.

Daniela Paes Leão (Coimbra, Portugal, 1974) graduated in 1999 from the Faculty of Fine Arts of the University of Porto. She works as a visual artist and filmmaker, developing creative projects that combine the aesthetic mediums of film, photography, publication and web design with sociology, anthropology and other disciplines. She lives and works at the present moment in Amsterdam, the Netherlands.
Loading Comments...
Comment
×