Early 2009 Daniela Paes Leão received an invitation from new cultural hotspot De Tolhuistuin in Amsterdam North and housing corporation Ymere to propose an art project for the Van der Pek neighbourhood. Until recently Amsterdam North was the forgotten part of the city of Amsterdam on the other side of the river IJ, with a strong industrial history and bearing the stigma of a poor, criminal and antisocial area. With the city in need for more houses for the upper middle classes, the area was now facing gentrification. Critical of this process by past experiences, Paes Leão proposed to turn on of the houses in the middle of the residential area into a public space. Paes Leão’s proposal was selected and KijkRuimte opened its doors in May 2009. KijkRuimte was the first project in which the artist approached space in itself as a medium, as an art form. Peas Leão approached space as flexible, open and porous, and manipulated the experience, perception and sense of it and created the conditions for others to do the same.

In her proposal the artist built on her initial research on Amsterdam North and the knowledge she had gained from her past projects. In particular themes she had already touched upon in Blue Meetings (2009), The Freedom to Question (2008) and The Identity Builder (2006) seem to have both informed as well as crystallised within the KijkRuimte project. In the cracks of the hastily thrown together community IJburg, The Identity Builder investigated the apparent contradictions between instant and organic urbanism, the old and the new, and host versus guest. The Freedom to Question made the artist aware of her position as a witness that sees a system from within, is part of it, has a certain influence and takes responsibility without being asked as opposed to an observer, an outsider who tries to take a neutral position. From Blue Meetings the artist took the notion of the potentiality of space itself as a flexible and porous medium. Paes Leão also drew knowledge from the work of the French sociologist Henri Lefebvre, who describes how space gains significance and meaning through its use. 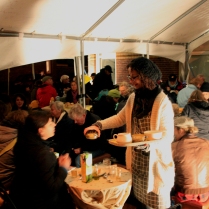 KijkRuimte was a cultural research platform in Amsterdam North. It was a four-year art project that contributed to the design and development of public space by artistic research and interventions as well as a platform for alternative social thinking. KijkRuimte was a house in the middle the neighbourhood where several artists and researchers were invited to live and work throughout the years. KijkRuimte was open to the public and served as a meeting place for various art and cultural communities in Amsterdam North. Within the context of a neighbourhood going through the process of gentrification and as a participant, or rather critical ‘witness’, in this urban renewal process, KijkRuimte stretched the boundaries between private and public, the social and the cultural, and the ancient roots and future qualities. KijkRuimte investigated the significance of temporal relationships in the public space for social cohesion, the social tissue. Anonymity is to some extent inherent to urbanisation, but this is not inconsistent with a sense of familiarity, recognition, and the importance of being able to identify oneself as well as the other in the public domain. Over a period of four years, KijkRuimte invited over 40 artists and researchers with various backgrounds to collaborate on projects executed in diverse media, which have the gentrification of Amsterdam North and the need for public space as a unifying theme.

FREE FOOD FOR ALL

In collaboration with URBANIAHOEVE / Debra Solomon a series of posters depicting a future vision of an edible ecological infrastructure for the Van der Pekbuurt were created.

A Detective Story About Amsterdam-North

Natalia Pershina, a member of the ‘Factory of Found Clothes’ and ‘Chto delat / What is to be done?’, collaborated with KijkRuimte to create a film that is a surrealist combination of layers of personal stories, historical stories and fantasies about identity and feeling at home.

Together with Yane Calovski, KijkRuimte worked on a documentary research project about the gentrification process of Amsterdam North that uses the personal story of Anne, a Van Der Pek inhabitant transitioning from male to female, as a metaphor. 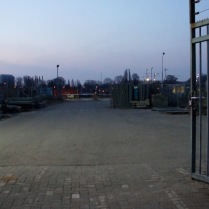 After four years in the Van der Pekbuurt, KijkRuimte invited Klasien van de Zandschulp and Jamer Bryan Graves to collaborate on a mobile application to make the collected audio of approximately 40 art projects available on diverse relevant locations in the neighbourhood using GPS. 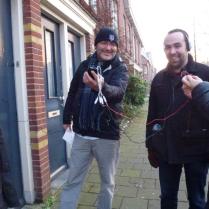 Together with Debra Solomon and Jaromil, KijkRuimte co-founded SPANONYMOUS; an artist collective and action group that produces hand-painted banners which facilitate a visual culture for dissent. Anyone protesting brute austerity measures or social inequality may use them in their demonstrations. 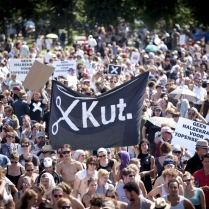 Daniela Paes Leão (Coimbra, Portugal, 1974) graduated in 1999 from the Faculty of Fine Arts of the University of Porto. She works as a visual artist and filmmaker, developing creative projects that combine the aesthetic mediums of film, photography, publication and web design with sociology, anthropology and other disciplines. She lives and works at the present moment in Amsterdam, the Netherlands.